Wave 4 is now completely out and it actually goes a bit in line with the Star Wars The Clone Wars Season 4 Series.

So without further ado: *Dogma’s Torso comes from a decal applied by Republic Customs, Jesse’s torso is a modified arealight torso with Greenpea Toy’s arms and an MMCB wasit cape. Hardcase’s body is from Greenpea Toys. Commander Wolffe and Boost’s bodies are from Lego.

All of these helmets are a pretty accurate representation of the clone troopers that they are meant to resemble. To be perfectly honest though, the printing isn’t as clean or clear as the previous runs.

Dogma: Dogma’s helmet is pretty accurate as I said earlier, but one issue I have is that the blue on the edges is a bit light compared to the blue everywhere else. I don’t know if this shows up on other helmets, but it does show up on the copy I received. Regardless it’s still a pretty nice helmet.

Jesse: Jesse’s helmet features a Lego Blue print that has the republic symbol (which in my honest opinion looks pretty good for being printed onto a curved surface) blue trim around the visor, and your generic clone helmet markings. The print job is pretty good, but there are a few issues with the lighter colour with the edges that the printing got onto. Over all though the helmet is nice and has a great looking design.

Hardcase: Hardcase’s design is actually really nice. It features blue printing that shows up pretty clear. The only real problem I can see with this is that the design is off center on some of the helmets. It’s really not that big of an issue though since it isn’t too noticeable. If you’re good with Brasso and want Kix without adding any paint, Hardcase is the way to go.

Wolffe: Wolffe by far is definitely the star of this release. He features a great design, which matches Lego’s Sand Blue and Arealight made a pretty dead on replica of the design on the show. No real flaws that I can see on this besides the fact the back wasn’t printed. However, printer limitations prevented having a print that runs all the way around without the possibility of problems.  Definitely pick this up if you get the chance.

Boost: Boost from what I’ve seen matches pretty well. I haven’t been able to find a picture from the show to reference, but he is pretty similar to most Wolffe Pack Troopers and as before with Wolffe, arealight did a great job with matching the colors. A bit of brasso on the spikes under the visor and you’ve got your generic Wolffe pack trooper.

Overall: I would have to say that this Wave turned out extremely well despite being so small in comparison to previous waves. Although the print quality isn’t as good or clear as the first wave Arealight released, it’s still fantastic. (The printing is pretty hard to remove beyond scraping it off with a knife.) Honestly, I could easily recommend these especially to people who are a fan of the Clone Wars series. Even if you aren’t, I would definitely suggest picking up at least Wolffe, simply because his helmet looks amazing.

Anyways, here are a few more shots of the helmets. (Hover mouse over image for more information). 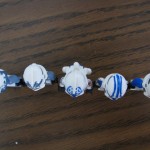 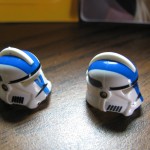 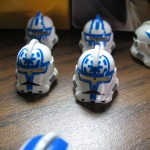 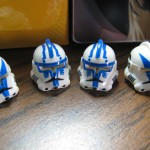 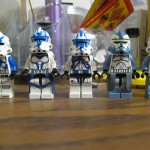 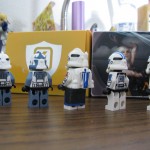 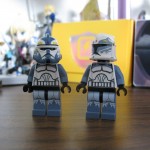